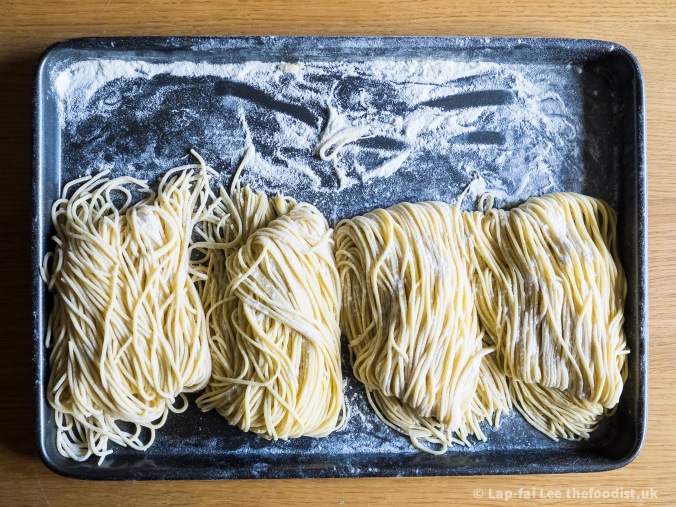 Ramen, at the moment it’s everybody’s favourite noodle. And why not? Cheap and delicious. An everyday Japanese dish with so much variation and endless refinement there’s something for every taste. For me, a bowl of Hakata style tonkotsu is my favourite ramen. Rich pork stock, marinated egg, sweetly soft slithers of chashu and of course those firm ramen noodles. You can get good tonkotsu in London now so I don’t have to go back to Kyushu for them. Though sadly Birmingham is still sorely lacking any, let alone good, ramen joints.

Yet these aren’t my favourite noodles. Ramen noodles are actually Chinese style noodles, a derivative of lai men “pulled noodles”. If you think there are a lot of variations of ramen in Japan, you should check out what they have in China! Unsurprisingly my favourite noodle dish of all comes from Hong Kong. 竹昇麵 bamboo noodles, made by pressing duck eggs, flour and salt with a large bamboo pole. That’s it! There aren’t many places left that do it the old way with a man riding the pole, levering the ingredients together until a smooth dough is formed. The dough is then flattened and cut into thin noodles with an incredible chewy springy texture so beloved by the Cantonese palate. At Lau Sum Kee Noodle Store 劉森記麵家 in Sham Sui Po, Hong Kong they serve these perfect noodles with a sprinkle of dried shrimp roe, beef tendon and brisket. This is my favourite noodle dish.

It doesn’t look all that does it? Just a splash of gravy from the beef bits, some gritty looking stuff on dry noodles. It’s certainly not as glamorous as a manicured bowl of ramen. But great Cantonese food is like great Italian food, appearing simple but hiding great depths. That cured shrimp roe is a local delicacy, made by harvesting small fresh water shrimp and filtering the tiny eggs. They’re salted and air dried, the flavour is like bottarga but more intense. Imagine how much The River Cafe would charge you for fresh duck egg pasta and a sprinkling of bottarga. This was 50HKD, about £4, and there’s beef too!

We can’t get cured shrimp roe here but we can make our own duck egg noodles. Which in my opinion are better than regular alkali ramen noodles in every way; flavour, texture and colour. Shame Japan hasn’t picked up on this in their popular ramen culture, I would love to taste the results. But that doesn’t stop us from creating a delicious bowl ourselves. Let’s start with the noodles.

Any resemblance to pasta is heretical

So we’ve made great noodles, let’s make some stuff to go with them. I’m not going to rolling boil a pork bone stock for 12 hours to make tonkotsu (not again) and I wouldn’t expect you too either. Let’s think about this laterally, Vietnamese Pho is lovely but that involves boiling beef bones for ages too. If we can apply those flavours to duck then there’s potential for a great bowl of duck ramen taking inspiration from across Asia.

You have noodles and you have broth. Add anything else you want to it. My chilli duck ramen has the broth infused with red oil chilli bean paste, slices of tea-smoked duck breast, a marinated soft boiled duck egg, shallots browned in duck fat and spring onions. Duck egg noodles are better than any other, try this recipe and see for yourself.

Everything but the quack! A manicured bowl of chilli duck ramen