It’s that time of the year that food bloggers regale you with lists of dishes in restaurants or corners of the world you’ll never go to and if you like that sort of thing you’ll not be disappointed. I’ll be doing that later, read on. But first I want to describe my favourite home cooked dishes of 2014 because you know me, I like to cook nice things. It means we don’t have to schlep to France or India for canelé or curry, we can bring these places to our kitchens and have the joy of creating something delicious.

You don’t have to go far to find delicious seafood even in Birmingham where you’re as far from the sea as  it’s possible to be in this country. Live brown crabs are cheap and plentiful and cooked simply as in this Rick Stein recipe from his India cookbook, it’s seafood perfection. A lightly spiced sour curry finished with fresh grated coconut. It’s the ideal dish to cook at home, you can make as much mess as you like eating it. This dish had me licking my elbows!

In his seminal book Thai Food, David Thompson describes two recipes for mussaman curry – a hard one and an easier one. This is the harder one that by his own admission is the most complex curry to make in the whole Thai repertoire, but also the most rewarding. I couldn’t agree more, it’s such a special dish, one that every home cook needs to try. It’ll re-evaluate how you feel about high street Thai food in the UK. In his book he uses beef but I’ve adapted it for duck. Just fry the duck pieces first to render off most of the fat. 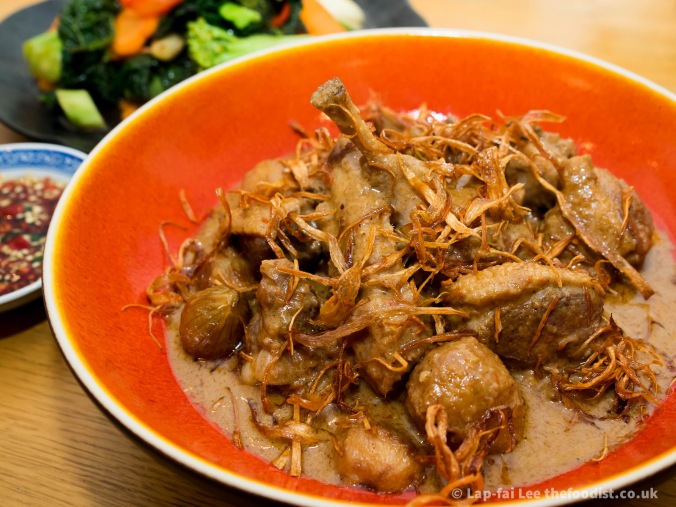 I’d bought the special metal moulds needed to make these years ago in a kitchen shop in Osaka but never got round to making them until 2014. These specialties from Bordeaux are a mark of finest French patissiers around the world. There’s a knack of coating the inside of the moulds with beeswax and butter so that the canelé have a crunchy crisp outside yet are still moist and custardy inside. They are absolutely not little sponge cakes. I managed to nail them first time! But haven’t been able to make them as well since, infuriating, expect to see more canelé in 2015.

At £30 per kilo, silver eels are pricing themselves out of reach. I only buy them once or twice a year and when I do there’s only one of two things I like to do with them; smoke or grill. This year grill won. Kabayaki unagi, Japanese grilled eel with a sweet soy glaze and rice. The eel bones were deep fried to crispy and the liver poached. Sansho pepper, seaweed salad, tea-smoked duck salad and anchovy bokkum completed the set. A once a year meal that cannot be replicated in any UK restaurant. 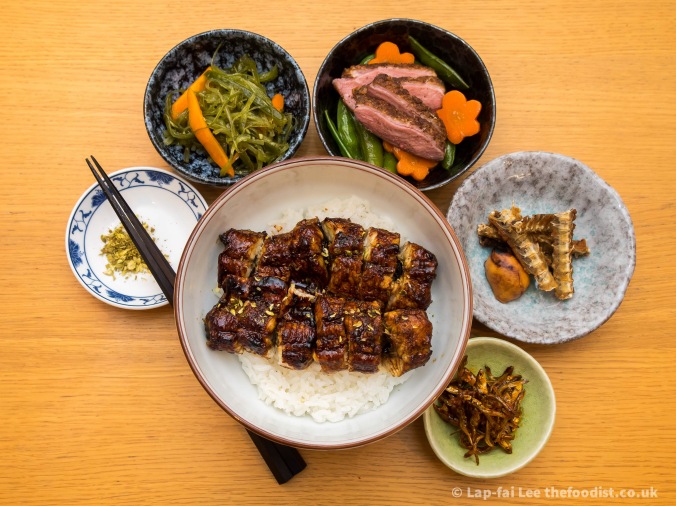 An aged dexter forerib cooked slowly in clarified butter for 20 minutes then rested for 10. The result is a deliciously complex nutty sweet buttery Maillard crust with a perfect medium rare centre. Roasted bone marrow and crispy chimichurri to garnish. I very rarely go out to eat steak. This is why, home-cooked is best.

Maybe my favourite home cooked dish of 2014, so simple yet so delicious. Follow my recipe and enjoy it for yourself. 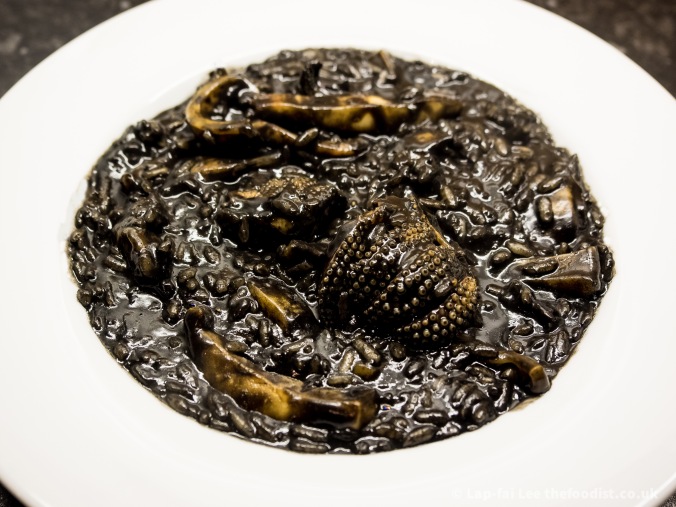 My BBQ team the Backyard Brummies enter the Bristol Grillstock competition every year. It’s the only one we do so compared to the other teams we’re kind of permanently rusty. Though somehow every year we’ve entered we manage to win a category, last year brisket came top, this year it was my ribs. I didn’t even like them, too soft and sweet for my personal taste, go figure! Still, Birmingham can lay claim to be the home of champion BBQ ribs. Hope we can carry on our winning streak in 2015.

Thanks to Cat, the 5th Backyard Brummie for this photo

Of course home cooking can’t exist in a bubble. Here are the experiences outside of my kitchen that have helped me to be a better cook.

L’Enclume is English kaiseki, the epitome of locavore, foraging, seasonality, refinement and above all deliciousness. Still in my mind the best restaurant in the country. Our fourth visit to Cartmel, there’s constant evolvement as you’d expect from the avant-garde of restaurant cuisine. This year the standout dish for me was the langoustine two ways. First raw atop a fine wafer with a fluffy shower of hazelnut, second grilled under a blanket of soft intense marshmallow-like shellfish bisque, carrot puree and fudgey black pudding. 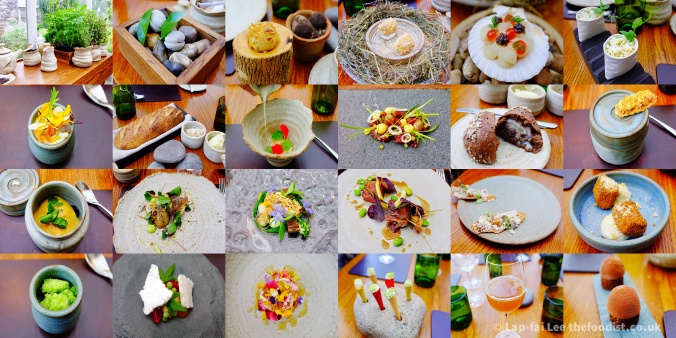 A most memorable foodist trip to Taiwan for not only the best streetfood but also for the best company we could have ever wished. Organised by the peerless Bao London crew and Florian Siepert’s late lamented Opentrips. This was a intensive gastronomic adventure. Everyday brought so many food highlights. Familiar dishes like panfried dumplings or beef noodle soup set the benchmark for all others. We chose the second biggest live king crab in Taipei, waited impatiently for it to be grilled and devoured it with such glee. A simple scallion pancake with sweet basil typified the higher level streetfood culture in Taiwan. 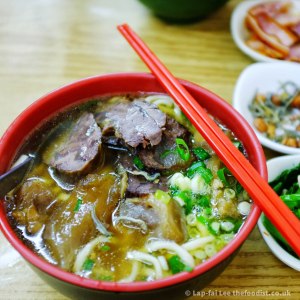 Sardines and Uni in Fukuoka

The Yatai of Fukuoka are mobile streetfood carts that are famous across Japan. In one I ate the freshest grilled sardine smeared with mentaiko (a local delicacy of fermented chilli pollack roe). In Yanagibashi market I bought a slab of uni and scoffed the lot for breakfast. Maybe cooking is overrated!

I ate some nice seafood in 2014 and none was better than the carabineiros, large scarlett shrimp at Cervejaria Ramiro in Lisbon. Simply salt baked on the plancha it needed nothing more. The large heads exploded with intense prawn juices self-saucing the sweet buttery bodies.

Stuffed with it’s own sauce

Lisbon is the home of Portuguese style egg tart and in particular in Belém you can find the wonderful pastries on every corner. It may sound strange but the best pastel de nata I had this year was in Osaka from Lord Stow’s bakery, an English Macanese company (hence the Portuguese connection). They cook them in small batches so you’re guaranteed to have perfectly fresh one every time. As good as the original Lord Stow in Macau.

Hare and Polenta at Carters

We don’t have to go far in Birmingham to sample excellent restaurant food, we have four Michelin starred places. But I don’t have to tell you that. Every Brummie, foodie or not, knows it. Yet the local dish that blew me away this year was Carters of Moseley humble hare and polenta. I’d swap all our stars for unpretentious cooking like this, in a city the size of Birmingham there should be twenty Carters knocking on Michelin’s doors.

Sourdough at The Ledbury

I’d always thought the sourdough at Hedone was the best bread I’d ever eaten and the only reason for returning. There’s no reason to now I’ve had the sourdough at The Ledbury! Sourdough bread is a personal thing, some like a gummy chewiness with a mighty crust. The Ledbury’s sourdough ticked all my boxes, thin crackling crust, a drier crumb with bags of wholewheat flavour. We ordered two extra portions, it was so good with the whipped goat butter.

ps. if you’d like to compare, you can see how 2013 in food went for me on smokeandumami.com.