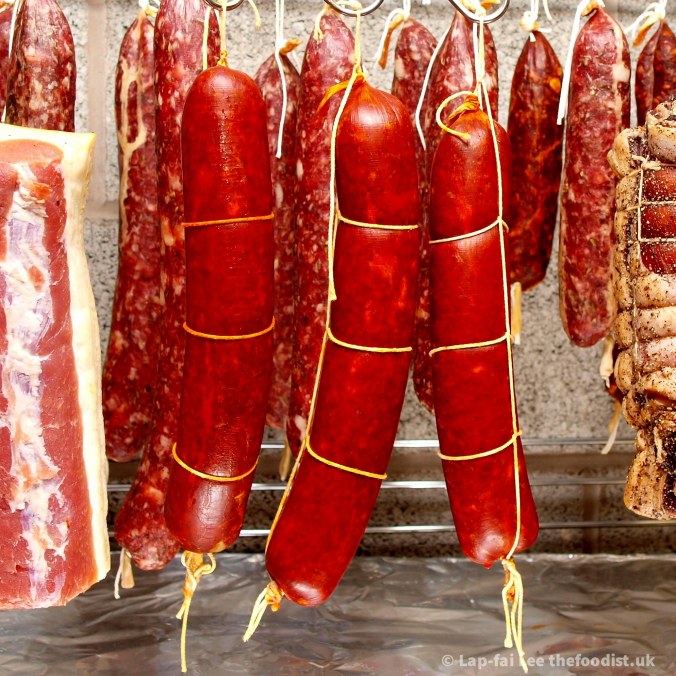 Nduja (en-doo-ya) is a lethally spicy but incredibly addictive spreadable salami from Calabria, Southern Italy. It gets it fearsome heat and blood red colour from the local Calabrian chillies, scorched by the sun to a vicious intensity. You don’t need a lot of n’duja melted on a pizza to make it special. Three or four blobs on a nice chewy base and you’re good. Or a small dollop melted in a pan throw in pasta and some seafood, forget about it!

The thing about nduja though, for an amalgam of basically pork fat and chillies, it’s needlessly expensive. Especially if like me you could spread the stuff all over your face, and I’ve got a big Chinese face. It’s dearer than Parma ham. So being a fairly seasoned charcutier, I decided it can’t be that difficult to make. It isn’t. The only problem is getting hold of Calabrian chillies. Instead I substituted the reddest chilli I could think of, gojugaru, Korean chilli powder. In Korean supermarkets they always keep this in the fridge, so it’s as fresh as can be in this country. It’s a magic ingredient, warm and sweet with deep fruity red pepper flavour. But of course, we all know how fussy Italians are about locality and produce, I can’t exactly call it nduja anymore. In deference to the dear leader, Kimdooya was born (I can’t remember whether it was me or my buddy Dom Clarke who coined this but it still makes me chuckle). Here’s the recipe:

I like nduja but this kimdooya is something else, the milder Korean chilli means you can use so much more of it. Which if you have a love of pig fat and chilli can only be a good thing.

with bucatini and basil, almost vegetarian